What Education Leaders Can Do to Stop the Spread of Measles 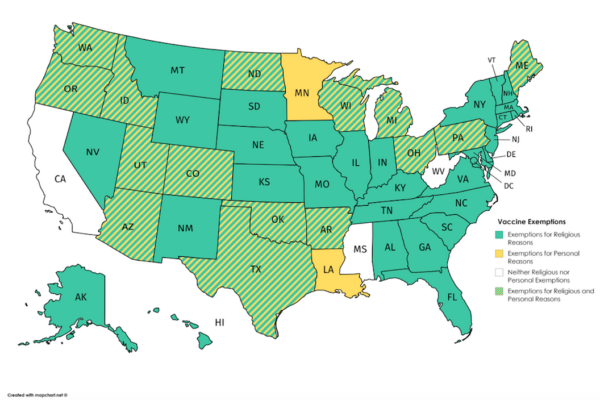 This piece was published by The 74.

The surge in measles cases across the United States has already produced the highest rate of infection in a quarter-century. Schools find themselves in the center of the crisis, both as the places where children gather every day and the public institutions with some sway over whether students are vaccinated.

That gives state and local school officials important roles in addressing the outbreaks, working with political leaders to make it harder to exempt students from required vaccinations while helping families appreciate why these inoculations are so important. Addressing the measles scourge is ultimately about educating people. And education is what schools do.

At the state level, boards of education and chief state school officers can speak out for changes to the vaccination requirements. Currently, 17 states allow parents to exempt their children from inoculations for personal or philosophical reasons. These exemptions should be eliminated.

A year after California stopped exempting students because of their parents’ religious or philosophical beliefs, the median rate of nonmedical exemptions among kindergartners was 0.6 percent. That’s down from 9 percent in charter schools, 5 percent in private schools and 2 percent in traditional public schools in the previous year.

Removing the religious exemptions, now offered in 47 states, may be politically difficult in some places. In New York, Gov. Andrew Cuomo is already questioning the constitutionality of legislation eliminating that exemption. Many of the more than 300 cases in New York City and its suburbs come in the ultra-Orthodox Jewish community, where some believe that vaccinations violate Jewish law.

That said, the use of the religious exemption is growing in many places, and some worry that it is being exploited. In Florida, for instance, the number of children exempted for religious reasons doubled from 12,200 to nearly 25,000 from 2013 to 2018. In 2018 alone, the state granted 5,300 of these exemptions, the Orlando Sentinel reported.

Six states are now considering legislation removing or restricting belief-based exemptions, and lawmakers there are swamped by protests from vaccination opponents. A Colorado legislative committee endured 14 hours of testimony earlier this month before advancing a bill.

Testimony from educators can counter the anti-vaccination rhetoric by explaining how disease outbreaks can affect schools and students. When nearly 800 unvaccinated students in southern Washington state were forced to wait out the three-week measles incubation period at home, they crossed an attendance threshold that put their academic success at risk. The wholesale absences slowed instruction for the rest of the students in their classes as well.

Local school boards could help by passing resolutions underscoring the wisdom of vaccination requirements and that the scientific evidence on the benefits of inoculations is crystal clear. This should extend beyond measles to other diseases, such as whooping cough, which is also having a resurgence. This approach could also identify anti-vax members of school boards, making public health an issue in elections as well.

[Read More: The Toll That Measles Outbreaks Take on Schools]

Local and state education leaders should highlight data about vaccination rates. Parents, especially those with medically fragile children, should know what to expect when they enroll their kids in school. The Florida State Department of Health has created an interactive map allowing families to see the rate of children receiving religious exemptions from vaccinations in every census tract and every public and private school. If states aren’t providing this sort of information, local school districts could make it available.

Beyond these policy moves, education officials can help parents by providing them with accurate information about the value of vaccinations. There is an increasingly sophisticated campaign warning parents against giving their kids the required shots. In many cases, parents worry that the measles, mumps and rubella (MMR) vaccine will induce autism, a fear based on a thoroughly discredited study.

A woman we encountered on Facebook shared a troubling study about the use of the mercury-based preservative thimerosal in vaccines intended for infants and toddlers. But thimerosal was removed from required children’s vaccinations in the United States in 2001 and has never been in the MMR shot.

Similarly, the Vaccine Safety Handbook, a document published by vaccination opponents, cites false claims that vaccines contain DNA from pigs (a problem for Orthodox Jews) or tissue from aborted fetuses (a turnoff for evangelical Christians).

Others point to bad reactions that some children have to inoculations, a genuine concern but one that rarely occurs. Between 2006 and 2017, the National Vaccine Injury Compensation Program heard 6,253 cases and awarded compensation in 4,291 of them, often in settlements reached without a ruling on the fault of the vaccine. In that time frame, 3.4 billion doses of vaccines were distributed nationwide.

Before a vaccine was introduced in 1963, the federal Centers for Disease Control and Prevention reported an estimated 48,000 hospitalizations, 1,000 cases with encephalitis and 450 to 500 deaths due to measles every year. There were additional deaths from whooping cough, diphtheria, polio and other diseases.

Some parents will never be persuaded of the value of vaccination. But by insisting on stronger vaccination laws and sharing the facts with families, educators can improve the safety of all students.