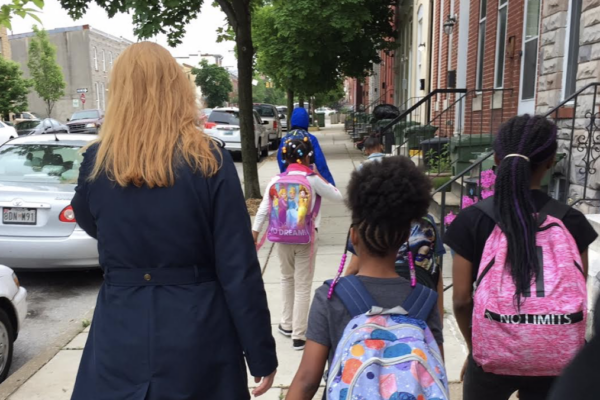 The first stop on the “walking school bus” route came with a quick rap on the door of a Baltimore rowhouse. A first grader emerged and gave a big hug to the neighborhood volunteer waiting for her. A few doors down, two girls bounded out to join the group and then skipped down the street to knock on another door. A little boy trudged out, rubbing his eyes. For 15 minutes, the caravan walked through East Baltimore, picking up children at their homes and delivering them to Commodore John Rodgers School.

In its effort to reduce chronic absenteeism, the pre-K to 8th grade public school is literally meeting students and families where they are and making it easier for them to get to school every day. The children in the program are chosen because they have shown up late or missed school too many times.

The initiative has produced impressive results at Rodgers. Several of the students on the Wednesday morning walk were dressed in jeans and T-shirts rather than their school uniforms—a “dress-down day” reward for students with perfect attendance in the previous month. Nearly half of the school’s 900-some students achieved that goal in April, says Principal Marc Martin, who stood outside the school, greeting each child with a handshake or a high five.

There’s no academic research on the effect of the walking school bus concept on student absenteeism. But as at Rodgers, schools and districts report reductions in absenteeism when they launch walk-to-school efforts—either targeted for students with problematic attendance or adopted for all students. In Springfield, Mass., for instance, chronic absenteeism in kindergarten through fourth grade dropped by 15 percent in the first two years of an attendance initiative that featured the walking program. Students who participated in the program had better attendance rates than similar students who didn’t.

[Read More: Danger on the Way to School]

The walking school bus concept also addresses concerns about student safety, particularly for those living in high crime neighborhoods. Research shows a connection between neighborhood violence and attendance. A recent study by Johns Hopkins University researchers found that Baltimore high school students who have to walk or wait for a bus along streets with high rates of violent crime are 6 percent more likely to miss school.

A survey by the Centers for Disease Control and Prevention found that 7 percent of students had missed school in the past 30 days out of a fear for their safety either at school or traveling to school. And the walking bus builds more physical activity into students’ days.

At Rodgers, increasing daily attendance is part of a larger school-improvement effort. When Martin arrived as principal is 2010, the school ranked 872 out of 875 schools in Maryland. With a mostly new staff, an infusion of cash from the federal School Improvement Grants program, and a Community Schools approach that includes a comprehensive commitment to improving attendance, test scores have risen and enrollment has ballooned from barely 200 students to some 900.