The Educators’ Case for Preserving Medicaid 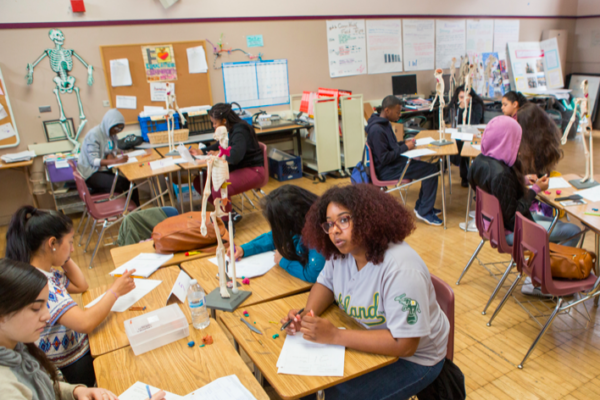 When Congress considered gutting Medicaid last year, school superintendents and other educators spoke out to help defeat the legislation. They pointed to the $4 billion to $5 billion in Medicaid funds that go directly to schools, mostly for supporting students with disabilities.

But cuts to the federal healthcare program, which could be considered again after the midterm elections, would deliver a far more devastating blow to education, namely in the impact on state budgets. We raised this possibility in a blog post last year, and a new analysis released this week by the Center for American Progress seems to confirm it.

The report estimates that states now spend more than a quarter of their money on education. If Congress went through with the latest proposal for cutting Medicaid, states could have to reduce education spending collectively by an estimated $15 billion a year in 2027. Those reductions could equal an average pay cut of more than $4,300 for every teacher or a tuition increase averaging $900 for every state university student, according to the analysis.

During the 2017 debate in Congress, some Republican lawmakers argued that cutting Medicaid would actually free up more state money to pay for education. That is a fallacy. Medicaid is a state and federal partnership, with the federal government paying at least half the healthcare costs for the 73.6 million beneficiaries across the country. Half of those beneficiaries are children, and most of the rest are elderly or disabled.

If the federal government cuts its contribution, these healthcare needs don’t go away. Only the federal dollars do.

[Read More: What’s at Stake for Schools in the Healthcare Debate?]

That would leave states with several choices. They could pick up more of the costs for beneficiaries, leaving less money for other priorities. They could leave it to the hospitals to provide care, often without hope of compensation. Hospital across the country are already struggling under that burden, with some shutting their doors. Or states could leave it to families to pick up the staggering costs of hospitalization, pushing them deeper into poverty or bankruptcy. Whatever happens, somebody pays.

There’s no way to predict how states would react, and we would likely see significant differences in how California or Mississippi or Iowa addresses the problem. For the purposes of their study, authors of the Center for American Progress report assume that states would use their own money to maintain existing levels of healthcare spending. They based their analysis on the Medicaid cut proposed in the president’s 2019 budget: $306 billion by the year 2027. Under such a scenario, California would have to cut $1.7 billion in education spending in 2027, and Texas schools would lose $1.5 billion.

Whatever states do to deal with the shortfall that would come with a loss of federal Medicaid dollars, education could well suffer. And as we saw in the Great Recession, cuts to education can lead to declines in student achievement.

Then consider the academic impact when millions of school-aged children, 37 percent of whom receive their health coverage from Medicaid or CHIP, lose access to quality care. Or the effect on children with disabilities who depend on Medicaid’s support to attend school regularly. Any significant reduction in federal health spending would have an inevitable impact on education.