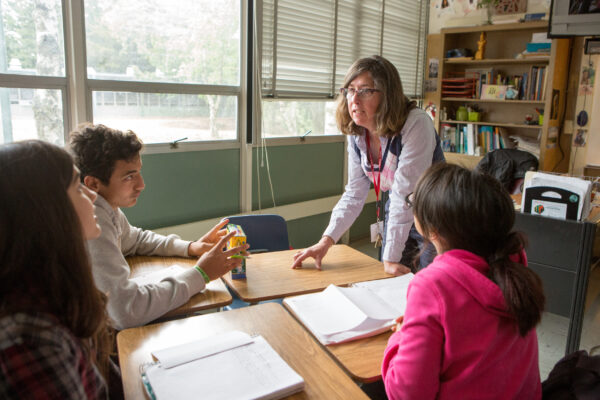 Restorative school discipline practices—also called positive discipline, responsive classroom, or empowerment—focus on fostering a sense of community within classrooms to prevent conflict, and on reacting to misconduct by encouraging students to accept responsibility and rebuild relationships.

The strategies provide an alternative approach to traditional classroom-management and student-discipline models that are typically more punitive. Under traditional models, a student might be detained by a school police officer and face suspension for a physical altercation with another student. But under a restorative system, the student might instead participate in a staff-led peer mediation session to discuss the fight and be required to help clean the cafeteria during a free period.

Restorative practices have gained traction in recent years in response to a growing understanding of the ill effects of policies that rely on suspensions and expulsions, particularly for students of color and those with disabilities, who are punished disproportionately in schools. Students who are suspended are at higher risk for poor attendance, dropping out of high school, and involvement in juvenile and adult justice systems.

While restorative practices are now used in schools across the globe, they trace their origins to indigenous communities who have emphasized dignity, healing, and community in justice practices for centuries.

Restorative practices are also related to social-emotional learning and multi-tiered systems of support. Commonly used restorative practices like conversation circles and restorative conferences rely on social and emotional learning to build community. Conversation circles are informal discussions that facilitate community-building by encouraging students to speak and listen to one another respectfully. Restorative circles are formal, structured meetings to discuss past conflict and how to move forward amicably.

School districts often implement these practices using a multi-tiered approach, where all students participate in community building but only students directly involved in a conflict participate in the restorative process.

In recent years, school districts across the country—including Pittsburgh, Denver, and New York City—have revised their codes of conduct to incorporate restorative interventions. Other countries, such as New Zealand, have been using restorative justice in behavioral frameworks for years, and even decades.

The Oakland Unified School District has seen positive results implementing restorative practices at its schools. Beginning in 2006, the more than 35,000-student district used the practices at a failing middle school and found an 87 percent decrease in suspensions. By 2011, Oakland expanded the practices to the entire school district using a three-tier, school-wide model.

A 2019 report from WestEd’s Justice and Prevention Research Center summarized the breadth of evidence on restorative practices and found that some schools adopt a universal approach that involves training all staff members and students, while others add the practices on to existing discipline systems.

Studies in cities including Los Angeles and Denver found that restorative practices resulted in lower suspensions rates for all students and narrowed gaps in suspension rates between students of color and White students. In the only study that assigned schools randomly at the time of WestEd’s publication, the RAND Corporation found an initiative in Pittsburgh public schools that used a restorative approach when students committed misconduct decreased overall school-level suspension rates and discipline disparities along racial lines, while boosting PSAT scores for 10th grade students and teachers’ assessments of school climate. The intervention didn’t go so far as to improve scores on state tests, and in the middle grades, scores actually dropped at the schools using the new approach.

Restorative practices have also produced benefits outside the U.S. A report from the U.K.’s Department of Education in 2011 found that 97 percent of schools rated restorative approaches as effective in preventing bullying.

For restorative practices to achieve these benefits, they should be coupled with resources and training for teachers and school administrators, researchers note. In their work on Philadelphia School District’s policy ending suspensions for minor behavioral infractions, researchers Matthew Steinberg and Johanna Lacoe found the policy was more effective with buy-in from teachers and administrators, and with alternative methods in place to address students’ underlying behavioral issues, such as the Positive Behavior Interventions and Support approach.

Current debates on restorative practices are split along party lines, and generally center on the responses to misconduct. Democrats generally embrace the approach, while Republicans argue that it leaves too many disruptive students in the classroom.

The Obama-era resource, “Guiding Principles: A Resource Guide for Improving School Climate and Discipline,” describes restorative practices positively, citing their ability to “enhance responsibility and accountability, build relationships and community, and teach students empathy and problem-solving skills that can help prevent the occurrence of inappropriate behavior in the future.”

At the start of the 2021-22 school year, Michigan’s Democratic Attorney General Dana Nessel penned a memoto public-school principals and superintendents emphasizing the importance of restorative practices. She wrote, “The data confirm that students of color suffered significantly more than their peers as a result of the pandemic. That’s why, as students return to the classroom, I am asking you to double down on our shared commitment to stamping out those disparities with every tool we have—particularly restorative practices.”

In contrast, at the Republican National Convention in 2020, Andrew Pollack, the father of a teen killed in the 2018 mass shooting at Marjorie Stoneman Douglas High School in Parkland, Florida, argued that weak disciplinary measures like restorative practices resulted in his daughter’s death. He said, “[G]un control laws didn’t fail my daughter. People did.” Referencing the school’s restorative practices, he continued, “I was just fine with the old approach to discipline and safety—it was called discipline and safety… But the Obama-Biden administration took Parkland’s bad policies and forced them into schools across America.”

This past summer, House Republican Whip Rod Montoya questioned the New Mexico Public Education Department’s new restorative justice programming, arguing the initiative “would issue the same ‘No Consequences’ policy in the classroom that has proven to be detrimental to criminal justice.”