College Credit in High School: Doing the Math on Costs

The last five years have seen a surge in state policy efforts designed to enable students to earn college credits while still in high school. To date, 47 states now have laws or regulations governing dual enrollment, and 48 have state policies surrounding the Advanced Placement (AP) program. 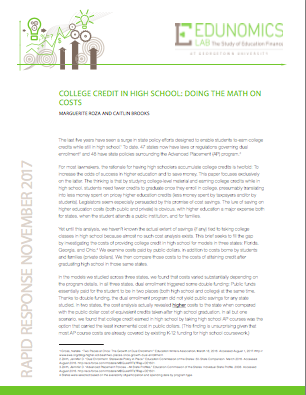 For most lawmakers, the rationale for having high schoolers accumulate college credits is twofold: To increase the odds of success in higher education and to save money. This paper focuses exclusively on the latter. The thinking is that by studying college-level material and earning college credits while in high school, students need fewer credits to graduate once they enroll in college, presumably translating into less money spent on pricey higher education credits (less money spent by taxpayers and/or by students). Legislators seem especially persuaded by this promise of cost savings. The lure of saving on higher education costs (both public and private) is obvious, with higher education a major expense both for states, when the student attends a public institution, and for families.

Yet until this analysis, we haven’t known the actual extent of savings (if any) tied to taking college classes in high school because almost no such cost analysis exists. This brief seeks to fill the gap by investigating the costs of providing college credit in high school for models in three states: Florida, Georgia, and Ohio. We examine costs paid by public dollars, in addition to costs borne by students and families (private dollars). We then compare those costs to the costs of attaining credit after graduating high school in those same states.

In the models we studied across three states, we found that costs varied substantially depending on the program details. In all three states, dual enrollment triggered some double funding: Public funds essentially paid for the student to be in two places (both high school and college) at the same time. Thanks to double funding, the dual enrollment program did not yield public savings for any state studied. In two states, the cost analysis actually revealed higher costs to the state when compared with the public dollar cost of equivalent credits taken after high school graduation. In all but one scenario, we found that college credit earned in high school by taking high school AP courses was the option that carried the least incremental cost in public dollars. (This finding is unsurprising given that most AP course costs are already covered by existing K-12 funding for high school coursework.)