Candice Jackson: In Her Own Words

Candice Jackson, the acting chief of the U.S. Education Department’s Office for Civil Rights, calls herself a libertarian and a feminist.

What does that mean for the agency she is now running and where she will likely remain in a leadership role? There’s little public record to answer that, since Jackson has never held public office or worked in civil rights enforcement.

For clues to her priorities, we turn to her own writings, starting with her pieces for the Stanford Review in college, through her legal writings on federal prosecution, to her most famous work: the 2005 book Their Lives: The Women Targeted by the Clinton Machine.

What emerges is a picture of a woman who rejects special treatment for women but stands up for women she believes are victims of sexual abuse, who decries overreach by federal prosecutors but is now in a position to enforce federal civil rights laws. 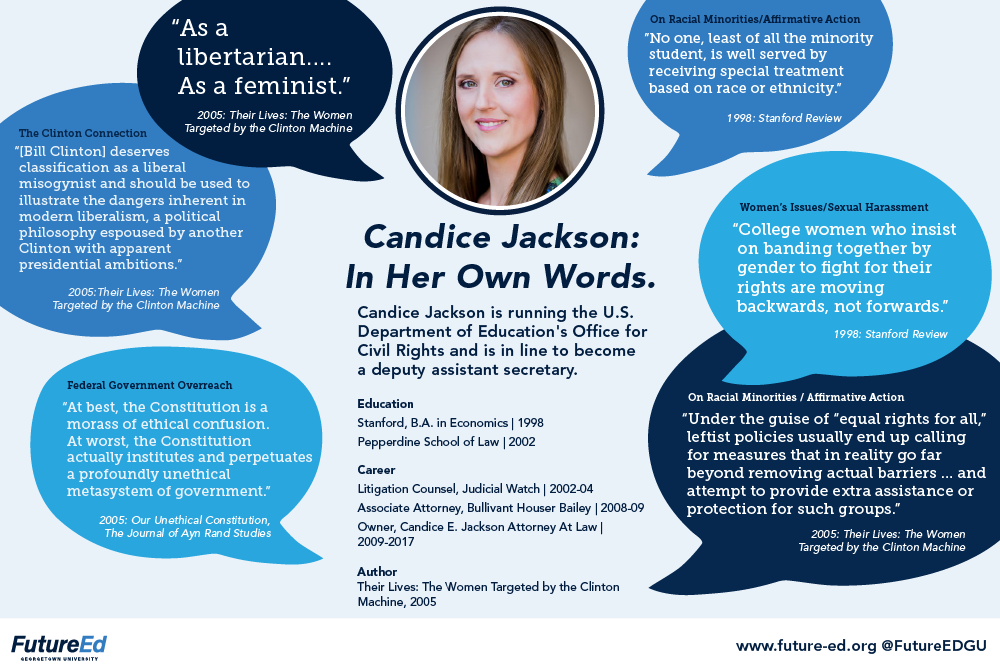 Jackson’s father, Ricky Lee Jackson, is a doctor who ran for Congress in 1998, with Candice managing his campaign.

As an undergraduate at Stanford University, Candice Jackson began writing for the Stanford Review, a conservative publication founded a decade earlier by Silicon Valley entrepreneur Peter Thiel. Her pieces include criticism of affirmative action as a “Band-aid solution” that discriminates against White students and a critique of the campus women’s center as “moving backwards,” as reported by Propublica. At the Review, she met Eric Jackson (no relation), who later went to work for Thiel, the Paypal founder who famously endorsed Donald Trump last fall.

Years later, Eric Jackson published Candice Jackson’s book on the women who accused former President Bill Clinton of sexual misconduct. Beyond detailing the various cases, Jackson uses the book to offer her views on a range of issues.

For instance, she takes issue with the assertion that women need protection from sexual harassment in the workplace. “This generalization pushes aside the fact that sexual assaults of all varieties were already punishable by law and glosses over the reality that unwanted sexual advances are difficult to define,” Jackson writes.

She also questions the value giving special treatment to women and minorities, writing: “Under the guise of 'equal rights for all,' leftist policies usually end up calling for measures that in reality go far beyond removing actual barriers that have subjugated members of these groups and attempt to provide extra assistance or protection for such groups.”

In 2015, a decade after her book was published, Jackson was hired by Trump adviser Roger Stone to go to Arkansas and interview Kathy Shelton, who was raped in 1975 at age 12 and whose accused rapist was represented by Hillary. Jackson and Stone strategized about how to use Shelton’s story to discredit the Democratic candidate.

Jackson did not mince words in criticizing Hillary Clinton. “She will trample on whatever victim she has to—women, children,” Jackson said in a Fox News interview with Sean Hannity. “It is a whole package demonstrating the corruption and just lies and lack of humanity of this woman.”

At the same time, she was quick to dismiss women who came forward to accuse Trump of misconduct. “Evidence is piling up that shows these recent accusers against Trump are, frankly, fake victims,” Jackson wrote in a 2016 Facebook posting. “Falsely painting yourself as a victim is not only horribly unfair to the person wrongly accused; it’s also an insult to real abuse victims.”

Beyond her high-profile comments on the Clintons, Jackson has a lesser-known body of work espousing libertarian positions on federal prosecution. In a series of pieces she wrote with libertarian scholar William Anderson, she questions federal involvement in cases including Martha Stewart’s insider trading charges, sports doping and NCAA booster violations.

“Congress has made federal crimes out of an astonishing array of behavior, much of which is already prohibited by state law, could be better addressed with civil penalties, or is considered wrongful not because it violates anyone's rights but only because Congress says so,” she and Anderson wrote in a 2004 piece in Reason magazine.

In a piece for The Journal of Ayn Rand studies, she describes the Constitution as  "a morass of ethical confusion."

Given these perspectives, how will Jackson approach the Education Department’s role in encouraging colleges and universities to pursue sexual assault cases under Title IX? Will she come to it as an advocate for victims or as a libertarian thinker? Likewise, how much weight will she give to data showing disparities in performance and school discipline based on race? And what will she do to enforce laws aimed at eliminating such disparities?