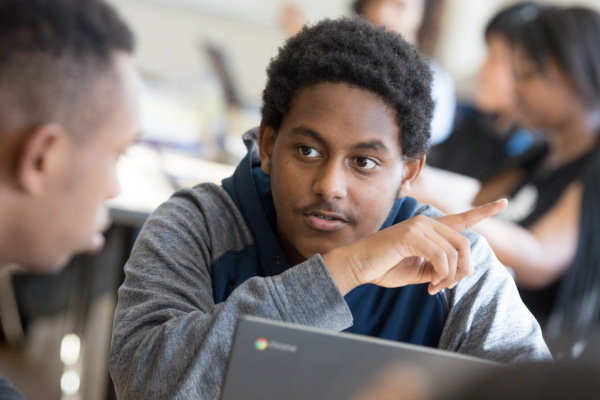 How should students face challenging work at school? Rather than avoid stress, they should harness it to help them achieve their goals, says David Yeager, a professor at the University of Texas, Austin and FutureEd research advisor, who has led a team of researchers exploring ways to help students deal with stress more effectively. Yeager spoke with FutureEd associate director Phyllis Jordan about his research, recently published in Nature.

Why is important to help students rethink the way they view stress?

Students are coming back to schools worn out and stressed from the pandemic, but they’re also academically behind. So we actually need to accelerate what they’re learning, but be attuned to the stress that they’re facing. It feels like there’s a predicament. We can either be tough as nails and not care about feelings, or you can be a softie and care about their feelings but have low standards. The real challenge is, how do you do both? That’s what our work is about.

Can you describe it?

We started with the idea that there are two mistaken beliefs. One is that if something is challenging, it means you can’t be good at it. That’s the fixed-mindset belief. And the other is that if you keep trying at something and it’s hard and you’re feeling stressed, that that stress is going to make you fail. Stress is debilitating you. We wanted to counteract those two beliefs simultaneously.

First, we give students the growth-mindset idea that challenges are an opportunity to grow rather than a sign that you lack ability. And second, we say that your body is actually mobilizing energy when it’s feeling stressed. It’s getting more oxygenated blood to your brain and to your muscles. The reason you’re sweating is because you’re cooling your body off, so that cooler blood goes in to your brain and your muscles. You’re breathing heavily because you’re getting more oxygen into your lungs, into your blood and into your brain cells, helping them get smarter.

So all those bodily responses when you’re stressed are actually resources. They’re not signs you can’t do something. They’re signs that you are preparing to do something.

How do you deliver this message?

It’s online and takes about a half hour. We ask students to describe a stressful event in their lives, then explain to them why stress can actually help them accomplish what they set out to do. We offer some ideas for dealing with these feelings and ask them to write something themselves telling other students how to deal with stress.

You conducted six experiments to test how well the intervention works. In one, you intentionally stressed out some college students. How did you do that?

We bring them in the lab, then hook them up to the åå, and then they do the intervention or not. Then we say, “Surprise, it’s time to give a public speech. The topic of your public speech is what makes someone your age popular in the eyes of their peers. And you have to give this speech in five minutes to a panel of judges who are going to evaluate whether you know anything about what you’re talking about.” We train those judges to have a stone face. They’re not mad, but they’re just not impressed by anything you say. And that stresses people out. And then the minute they finish, we say, “Surprise, it’s time to count backwards from 968 in increments of 17 as fast as you can.” Then the evaluator will stop and make them start over anytime they make a mistake.

What were the results?

We find that if the young people got this new mindset treatment they show dramatically different physiology profiles when we look at their cardiovascular system.

There are two kinds of responses people can have. One is a threat response. You have that response if you think the demands you’re under are worse than your resources to cope. The challenge response is more positive—you’re doing something hard, but you feel like you do have the resources to cope.

We can look at the blood vasculature and the capillaries and figure out which response we see by figuring out if the heart is pumping a lot of blood through their body to their extremities or not.

You also tested the intervention at a K-12 school with students living in poverty. Were the results the same?

This was in a very low-income, urban charter school. It’s a high-demand school with highly qualified teachers, but almost 99 percent of its students are students of color who are experiencing poverty. For that one, we took cortisol samples. We look at their spit [for the stress hormone] every day for a few weeks. The students who did the intervention had less cortisol in their saliva. That was fall 2019. And then spring 2020, the Covid semester, they were far more likely to have passed their math and science classes.

Could you measure the impact of Covid and the added stress it brought?

We happened to do the experiment in January 2020, and then the pandemic happened. But the students we were working with completed an anxiety inventory in April. So we accidentally did an experiment of preventing anxiety during COVID. It was during the full lockdown mode. And we saw really nice effects on anxiety that semester.

That the students who have had this intervention were less likely to be stressed out?

They had less crippling anxiety during isolation.

Where do you go from here? Is this an intervention you think all schools should give to their students?

Yes, the state of Texas is planning on making it freely available for all higher education institutions in Texas. We want to make it available to high schools as well. We have been asked by people from around the world to make the intervention available.

How does this connect to the growth-mindset work you’ve done before?

The growth-mindset intervention was really about students seeking out the challenges and doing well in school. But a lot of people load themselves up with challenges, and then they are stressed because they can’t manage them all. We’re saying, “Don’t just give people a growth mindset and have them be overwhelmed with challenges. Also help them manage the stress that comes from that and embrace the stress that comes from that.” That’s one big lesson.

[Read More: A Proof Point for the Value of Growth Mindsets]

The other big lesson is that in both lines of work, we’re starting to think more about adults, not just student mindsets. That’s because kids need to be in an environment that supports their mindsets even after they’ve acquired them. Can teachers echo or support these stress messages? For instance, if a student is behind in class, does the teacher say to them, “You must be really stressed. Don’t worry about matching this material, just memorize it?” And I’ll tell you, in a higher ed, that’s what I see all the time. Professors are like, “You sound really stressed. Don’t worry about it, just do the minimum.” They do that in intro chemistry, and then students get to organic chemistry the next year, and they fail that, and they’re never a doctor. Or they’re never an engineer. Getting teachers and professors to convey the right stress messages to help students succeed is our main research priority right now.