What the Pandemic Did to NAEP, State Standardized Test Scores 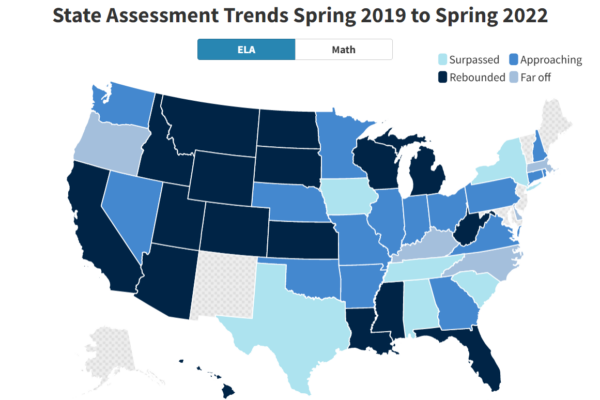 (Updated 12/8/22) The recent release of scores from the National Assessment of Educational Progress (NAEP) provides a jarring reminder of the pandemic’s impact on academic achievement. The U.S. Department of Education’s portrait of student proficiency in math and English language arts in fourth and eighth grades found declines in every state between 2019 and 2022. In two thirds of states, proficiency rates dropped in both subjects and in both tested grades.

And students in states that re-opened schools quickly during the pandemic often performed no better than those in states that stuck with remote learning longer. Hardest hit were eighth grade math proficiency rates, which fell 8 percentage points as the raw test score saw its biggest drop in the history of the national testing program.

Though it’s difficult to make precise comparisons between NAEP and state-level standardized test results, the NAEP trends largely mirror the findings of a FutureEd analysis of the testing trends of the 45 states that have released results from spring 2022 and have scores that can be compared to previous years.

Nationally, 33 percent of fourth graders scored at the proficient or advanced levels on the 2022 NAEP reading assessment, down 2 percentage points from 2019. The share of proficient students also fell two points at the eighth grade level, from 33 to 31 percent. That comes as reading scores at both grade levels dropped 3 points, leaving them not significantly different from 1992. The 2022 assessment, administered between January and March, included nearly 450,000 fourth and eighth graders in more than 10,000 schools. It relies on a representative sample of students in all states and some large cities, while state testing is intended to capture results from all students.

On the NAEP, a proficient student demonstrates “solid academic performance and competency over challenging subject matter.” States typically determine their own standards for what is considered proficiency on their own testing and set a score to determine which students meet the mark, making it impossible to compare across states. But they provide a useful comparison of how a state’s students were doing before and after the pandemic. 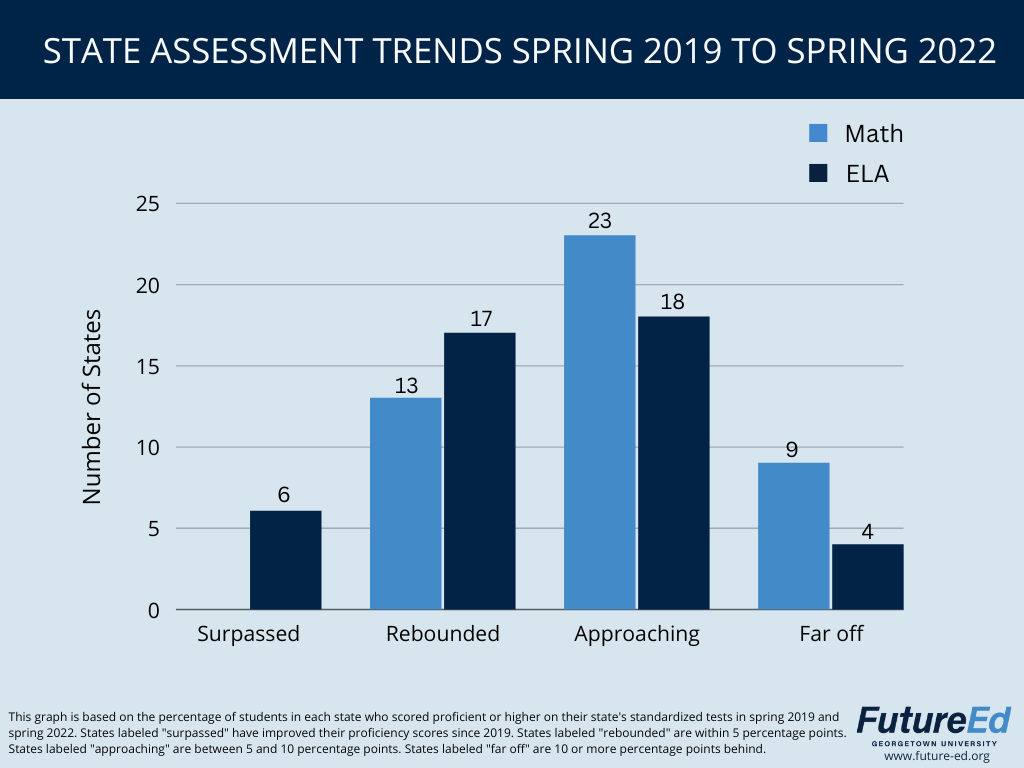 proficiency rates from 2019, FutureEd’s analysis shows. A state’s overall proficiency rate includes English language arts scores from grades 3 through 8, as well as a high school test in some states. Seventeen states were within 5 percentage points of their 2019 overall rates. Another 18 dropped five or more points. And in four states 2022 rates were a striking 10 or more points below their pre-pandemic levels.

On average, states’ English language arts proficiency rates declined 4 percentage points, with North Carolina seeing the largest drop at 16 points. States did not administer standardized tests in spring 2020, and not all of them tested their students in spring 2021. Of those that did, most made up some ground in English language arts between 2021 and 2022, with an average gain of 1 percentage point. Texas students posted a 9 percentage point proficiency gain, the largest increase among states that have released their 2022 results.

In the fourth and eighth grades—which are tested by the NAEP—state standardized test results showed that only four of the 45 states in the FutureEd analysis recorded higher English language arts proficiency scores at the fourth grade level in 2022 than in 2019: Texas, where the proficiency rate was up 11 percentage points, Alabama, up 6 points, Tennessee, up 5 points, and Iowa, up 3 points. The steepest proficiency declines were in Massachusetts (14 points) and Delaware (13 points).

The differences between the NAEP and state testing are not entirely surprising. NAEP sets a different bar for proficiency than most state tests do. Some states actually changed their cut scores for what qualifies as proficient in the past two years, and some states changed tests. Alabama, Arizona, and Kentucky changed tests between 2019 and 2022, making comparisons across the years challenging. Alaska, Maine and New Mexico also changed tests but the scores could not be compared. At the same time, state tests are often more closely aligned to state standards and what students learn in the classroom—meaning they may capture student achievement trends more accurately.

The results in math were more discouraging, both on the NAEP and state tests. At the NAEP’s fourth grade level, the rate of students scoring proficient or above fell from 41 percent in 2019 to 37 percent this year. Among eighth graders, the proficiency rate fell from 34 to about 26 percent. Both are significant drops that mirror unprecedented declines in raw test scores: a 5-point drop at the fourth grade level and an 8-point decline in eighth grade.

We found no states making gains in fourth grade math and several states with steep declines on state tests: proficiency rates dropped 17 percentage points in Virginia, 16 points in Delaware and the District of Columbia, and 13 points in Alabama.

The only proficiency gains on state standardized tests at the eighth grade level were in Georgia and Missouri, at 1 and 3 percentage points, respectively. Rates were flat in Mississippi. But they were down 24 percentage points in Alabama, the largest drop in the nation, 20 points in Virginia, 17 points in Texas, and 14 points in Ohio, Delaware, and Washington state.