How D.C. Schools Are Revolutionizing Teaching

When most people think of school reform in the Dis­trict of Columbia, they probably remember the Time maga­zine cover photo of former Chancellor Michelle Rhee with a broom in her hand and a hard look on her face. In leading the school system from 2007 to 2010, she was the polar­izing public image of a controversial national strategy to improve public education by cracking down on bad teach­ers. But in the seven years since Rhee left Washington, her successors have quietly but persistent­ly continued to pursue change.

With support from the Carnegie Corporation of New York and the Joyce Foundation, FutureEd Director Thomas Toch spent months researching the transformation of the teaching profession in Washington, D.C. The story he found, which appears in the Washington Monthly magazine, confounds the traditional battle lines in public education and points to the D.C. reforms as a model for the nation.

Eric Christopher is the kind of young, gifted, committed teacher that any principal would want to hire. A straight-A student from a public high school on Maryland’s Eastern Shore, he gave up a chance for an Ivy League education to take care of his sick mother and attend nearby Washington College, from which he graduated magna cum laude in 2006. He spent the next seven years at a public elementary school near his hometown, teaching the Spanish-speaking children of agricultural and poultry workers while earning a master’s degree in bilingual education. But opportunities to advance were mostly based on teacher seniority, the pay was low, and he was eager for a fresh challenge in a new environment. So, in 2013, he moved to the big city—Washington, D.C. 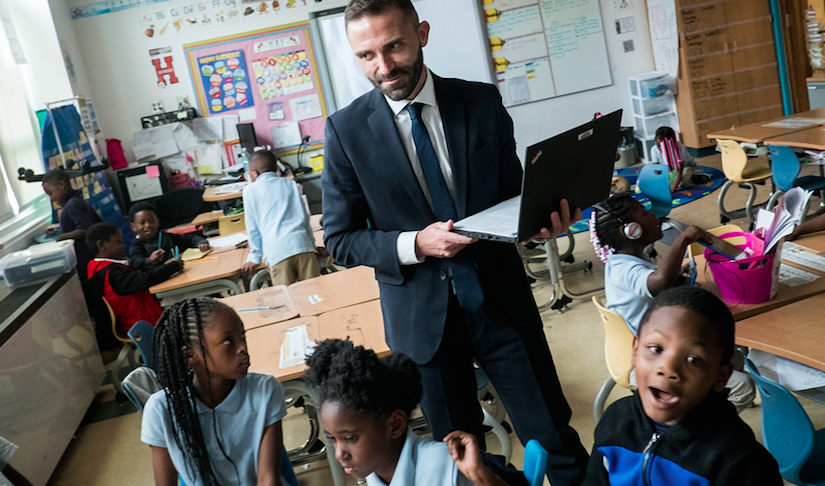 The nation’s capital had become something of a magnet for well-educated, idealistic young teachers like Christopher, many of them drawn to the rapidly expanding network of public charter schools. Some 43 percent of D.C. students were enrolled in charters in 2013, up from less than 15 percent a decade earlier. Many of these schools, with names like DC Prep, KIPP DC, and Achievement Prep, were earning attention for their innovative strategies and strong results. Foundations heaped money onto them, and the young talent entering teaching through prestigious pipelines like Teach for America were keen to work in the schools.

After moving to Washington, Christopher quickly got hired at one of the city’s oldest and largest charter schools, the Dorothy I. Height Community Academy. But not long after he started, reports surfaced that would lead to the indictment of the school’s founder for embezzlement. (The school has since reopened as a non-charter public school.) Christopher found himself planning his departure from Height only a year after arriving.

After that discouraging experience at a public charter, Christopher decided to check out openings in the city’s traditional schools, run by the District of Columbia Public Schools system. To say that DCPS had a poor reputation would be an understatement—the national media had long labeled it one of the worst school districts in the nation. But as Christopher spent time on the DCPS website, he saw opportunities for high-performing teachers to become instructional coaches—just what he was looking for.

He applied, and was surprised by the rigor of the hiring process—much tougher than what he had experienced in previous teaching jobs. He was judged on a video of his teaching, his analysis of another teacher’s instruction, a written test on teaching strategies, and multiple rounds of interviews with central office staff. Once he had run that gauntlet, his name was posted to a central candidate bank where principals, who had the final say in staffing their schools, could choose to follow up.

Several did, but one in particular impressed Christopher. His name was Eric Bethel, principal of Turner Elementary School, located in one of the city’s poorest southeastern neighborhoods, seven miles and a world away from the White House.

It was a hot Friday afternoon in late August when Christopher, who has the close-cropped hair and slight build of a long-distance runner, arrived at the school for his interview. He was sweating in a suit and tie. Bethel, wearing a Turner T-shirt over a dress shirt and suit pants, and the assistant principal, Lisa Rosado, put him at ease with a warm welcome. Bethel asked about Christopher’s background, teaching philosophy, and experience working with impoverished students. It quickly became clear to Christopher that Bethel was as serious as he was sociable— “clearly a man on a mission,” he would later recall. Bethel, then thirty-seven years old and new to Turner, was open about the school’s difficulties. Ninety-seven percent of its students were black, and 88 percent received public assistance. Test scores were among the lowest in the district. But Bethel expressed infectious excitement about assembling a new team of teachers and his commitment to working closely with them to turn the school around.

Bethel was equally impressed with Christopher, especially his commitment to the school’s mission. “This is really tough work,” Bethel would later say. “If you’re not driven by a sense of social justice, you’re not going to last.” At the end of the ninety-minute meeting, he told the candidate to let him know if he heard from other schools. Not taking any chances, he emailed Christopher an offer early Sunday morning. Christopher accepted.

Turner used to be the type of school where many teachers ended up because they couldn't get jobs elsewhere. But after three years there, Christopher, now thirty-two, has no regrets. During two long Saturday-morning conversations at a high-end coffee shop in an up-and-coming neighborhood near Nationals Park, he explained why he loves his work. Today, he said, there is a “strong sense of professionalism, a sense that we’re a team.” Thanks to his own strong performance over two years as a teacher and instructional coach, Christopher is earning $127,000, more than double what he was making on the Eastern Shore. 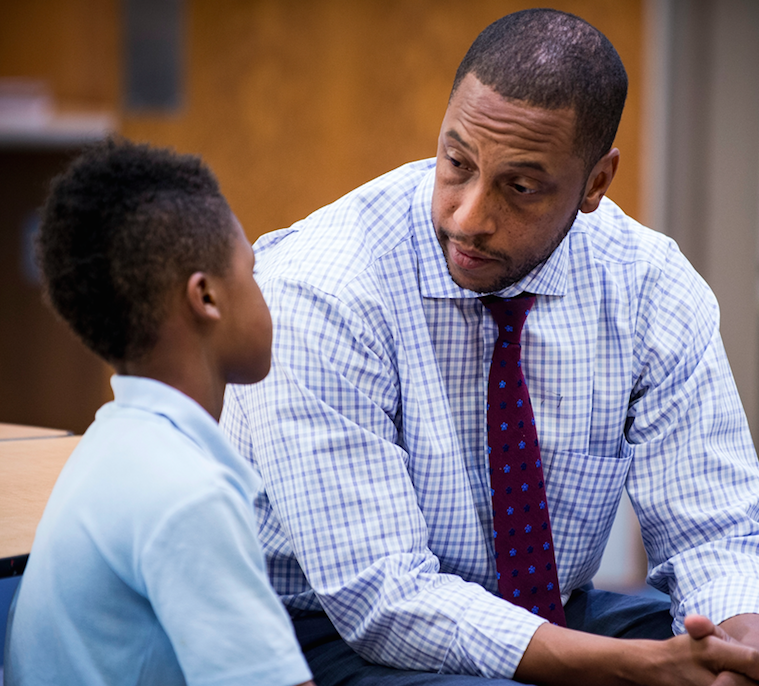 After decades of dismal academic results, Turner has begun to change the educational equation in its classrooms. The percentage of students reading at or above grade level has risen from 23 percent in early 2014–15 to 60 percent today. Suspensions are down from 13 percent of the student body to 5 percent. And despite intense competition from charter schools, its enrollment is up 32 percent since Bethel’s arrival, to 520 students.

Turner’s nascent resurgence reflects progress in the DCPS system as a whole. Daily attendance has reached 90 percent, up from 85 percent in 2010–11. Chronic truancy is down by nearly 40 percent over the past four years. Graduation rates have climbed to 69 percent, the highest in the city’s history.

And student achievement has begun a long climb toward respectability. While Washington’s test scores have traditionally been among the lowest in the nation, the percentage of fourth graders achieving math proficiency has more than doubled on the National Assessment of Educational Progress (NAEP) over the past decade, as have the percentages of eighth graders proficient in math and fourth graders proficient in reading. Scores have risen even after accounting for an influx of wealthier students. And DCPS has caught up to the middle of the pack of other urban school districts at the fourth-grade level on the national exams.

In addition, the school system’s strongest teachers are no longer leaving in droves for charter schools. In many cases, the flow has been reversed, leaving even Washington’s most prominent charters struggling to compete for talent.

When most people think of school reform in the District of Columbia, they probably remember the Time magazine cover photo of former Chancellor Michelle Rhee with a broom in her hand and a hard look on her face. In leading the school system from 2007 to 2010, she was the polarizing public image of a controversial national strategy to improve public education by cracking down on bad teachers.

But in the seven years since Rhee left Washington— and with the national press having turned its attention elsewhere—Rhee’s successors have quietly but persistently continued to pursue change. Teaching in D.C., and in public education generally, had long been a low-status occupation marked by weak standards and factory-like work rules. Building on Rhee’s early work, and learning from her mistakes, her successors have effectively transformed it into a performance-based profession that provides recognition, responsibility, collegiality, support, and significant compensation—features that policy experts, including many of Rhee’s harshest critics, have long sought but never fully achieved.

Ironically, Rhee’s successors at DCPS have redesigned teaching through some of the very policies that teachers’ unions and other Rhee adversaries opposed most strongly: comprehensive teacher evaluations, the abandonment of seniority-based staffing, and performance-based promotions and compensation. They combined these with other changes, like more collaboration among teachers, that these same critics had backed. Just as notably, the transformation is taking place not at charters but in the traditional public school system, an institution that many reformers have written off as too hidebound to innovate.

The story about D.C.’s teacher reform efforts since Michelle Rhee’s departure has gone untold until now. One reason is that her successors have sought to escape the media glare of the Rhee era; they haven’t presented the press with natural protagonists. Another is that amid the trench warfare that the school reform debate has settled into in recent years, with the liberal-left and unions rallying around traditional schools, and moderates and conservatives supporting charter schools, neither side has had an interest in promoting the story.

But in the course of research I have been doing on teacher reform nationwide, I have followed DCPS’s evolving human capital system, interviewing senior school system officials and watching reforms play out in Washington schools. What I’ve found is a story that confounds the traditional battle lines in public education, and gives each side in the school reform war reason both to cheer and to rethink its assumptions.

Read the full story in the June issue of Washington Monthly.