The Department of Education released new “borrower defense repayment” rules in August that make it harder for students at fraudulent for-profit colleges to pursue federal loan forgiveness. The rules are the latest in a series of regulatory steps the department has taken under the Trump administration to roll back protections for student loan borrowers at for-profit colleges and universities. Meanwhile, for-profit college students comprise 9 percent of the nation’s higher education enrollment yet 33 percent of loan defaulters. Most recently, attorneys representing students from the defunct, for-profit Corinthian College asked a federal judge to hold U.S. Education Secretary Betsy DeVos in contempt  for continuing to collect loan payments from students, despite a May 2018 court order putting a hold on such payments.

The industry has been widely criticized for leaving students with substandard educations and substantial debt. DeVos nonetheless has repeatedly sided with the sector. As it happens, she has previously invested in for-profit education companies, placed several senior industry officials in policy making roles in the department, and reports to a president whose own for-profit, real estate university closed down for false advertising in 2010. Congress was unable to question DeVos before her financial disclosures were submitted, but she subsequently pledged to divest in some of her holdings. 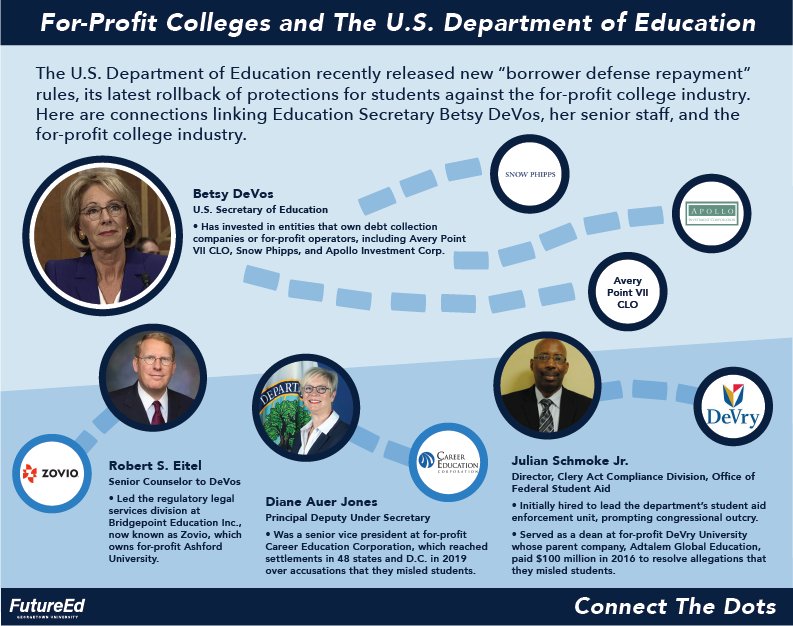