An Educator to Lead the Education Department 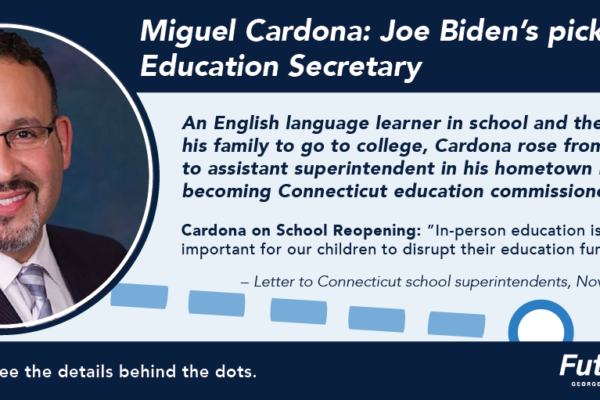 In nominating Miguel Cardona as education secretary, President-Elect Joe Biden has delivered on his promise to choose a public educator for the job. Cardona spent two decades working in his hometown school district in Meriden, Connecticut, where a majority of students are Hispanic, before becoming Connecticut’s state education commissioner in August 2019. He describes being around students as “fuel for the soul.”

Raised in public housing, he is a first-generation college graduate who went on to earn a doctorate in education. In his speech accepting the nomination, Cardona spoke eloquently about his respect for teaching.

“For far too long, the teaching profession has been kicked around and not given the respect it deserves,” he said. “It shouldn’t take a pandemic for us to realize how important teachers are for this country.”

Having spent his career in the elementary and secondary sectors, the 45-year-old Cardona brings to Washington little experience with the daunting challenges facing higher education—including the low quality of many public colleges and universities, the troubled for-profit higher education industry, college affordability, and the unsustainability of many colleges’ business models.

He was neither a school-reform hawk or an education establishment apologist during his short tenure as Connecticut’s commissioner of education—signaling his support for state testing and charter schools, for example, without pushing aggressively on either front. Biden likely selected Cardona in part because his moderate stances on school reform made him something of a compromise candidate to the centrist and left-leaning factions of the Democratic party that have waged a pitched battle on school reform since the Bush administration.

[Read More: Who’s Who in the Education Department]

The latter half of Cordona’s tenure as state commissioner was consumed by the coronavirus pandemic, pushing to get students back in schools to minimize learning loss. That challenge—helping the nation’s schools and colleges recover from the devastating consequences of the COVID crisis—is going to dominate his agenda in Washington, a far larger stage than the elementary schools he where has worked for most of his career.