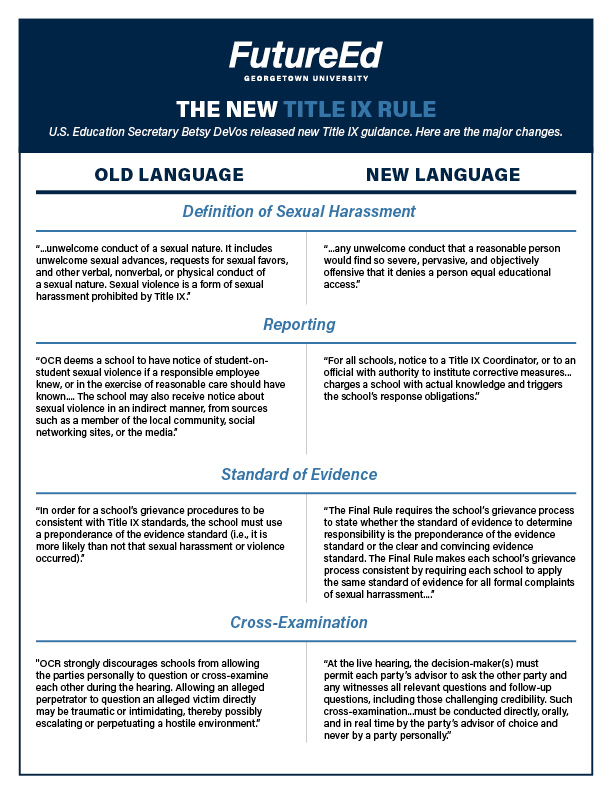 U.S. Secretary of Education Betsy DeVos has released new federal regulations for Title IX, one of the Education Amendments of 1972 that prohibits sex discrimination in federally funded education programs. The new rule, as it’s called, replaces Obama administration guidance and makes the reporting and adjudication of sexual harassment in schools and colleges more arduous and makes it more difficult to find an accused student guilty.

The 2,033-page document narrows the definition of sexual harassment and reduces the number of university employees who can trigger an investigation. It gives education institutions the option to choose a higher standard of evidence for determining guilt. And it provides opportunities for cross-examination of both accusers and the accused.

Proponents of the new rule argue it restores due process rights previously denied to students, staff and faculty accused of sexual harassment. Opponents say the changes may have a “chilling effect” on already-low reporting rates because students will fear they have insufficient evidence or fear being re-traumatized by a cross-examination.

The proposed rule, released in November 2018, went through a notice-and-comment period that received more than 120,000 comments. The Office of Management and Budget then conducted months of stakeholder meetings with survivors, students wrongfully accused, college and university leaders, and free-speech and women’s advocacy organizations. But the final rule ended up nearly mirroring the administration’s original proposal.

The rule is scheduled to go into effect in August, but it’s introduction may be delayed by litigation. Advocacy organizations like The National Women’s Law Center and Know Your IX are preparing to challenge the rule in court.